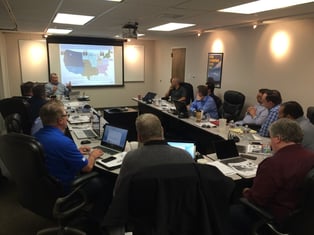 This past week Navigator held it’s Q2 Sales Summit over 3 days at Navigator Headquarters in Pleasant Grove, UT.  The entire sales team joined for the summit where a wealth of information and best practices were presented in addition to new tactics and strategy to further secure Navigator as a globally recognized, top VAR (value added reseller) of ERP software.

However, the majority of the summit was led by Navigator’s SVP of Sales and Marketing, Geoff Ashley.   It was Mr. Ashley’s vision to hold the summit as a way to celebrate Navigator’s largely successful Q1 campaign, while shifting focus to continued growth and revenue capture for the remainder of 2016.  Other topics addressed by Mr. Ashley included creating trusted relationships, shortening the sales cycle, defining the dynamic working relationships of the sales teams, and generally expanding Navigator’s reach to new levels.

Overall, the event strengthened uniformity and cohesiveness within the sales teams while enabling future successes through fresh strategy and goal setting.  The team will again meet during Navigator’s semi-annual All Hands Meetings to be held in July 2016.