Navigator looks ahead to 2016 with All Hands meetings 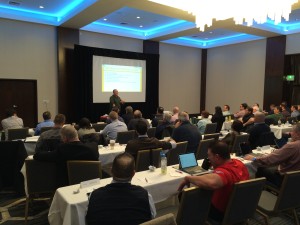 ness Solutions’ semi-annual All Hands Meetings concluded a successful 2015 campaign while shifting focus to continued growth and achievement in 2016.  The event, held at the Provo Utah Marriott Hotel from January 14-16, brought together the entire Navigator team from 27 offices throughout the country.  Continuous improvement took the center stage in the dialogue of the meetings as Navigator engages to secure its status in the coming years as SAP’s top worldwide cloud reseller.

Geoffrey Ashley, guest speaker and business transformation specialist, spent the week instructing the team of best practices and areas of refinement in multiple categories.  Within his presentations, Mr. Ashley also focused on the current state of the company, Navigator’s Values, Mission, and Vision, leadership and role models, doing business within the 21st century, and general complexities of being a top VAR (value-added reseller)  within the ERP (enterprise resource planning) community.

In addition, employees received product and project training and updates from Navigator’s executive and management teams during the event, and company meals were provided throughout.  One of the highlights was on the evening of January 14th as top performing employees were presented with President’s Club awards, and President’s Team awards at a special dinner event held off-site.

During the trainings, Navigator CEO Grant Fraser presented a new set of Value’s, Mission, and Vision for the Navigator team, in addition to refining guiding principles to create a stellar customer experience,  which reflects Navigator’s ongoing goal to retain customers for life.  These items were among the key take-aways for the event.

Of the All Hands experience, Mr. Fraser remarked “We have had great success the last ten years … I look forward to working with (the team) the next five years as we take Navigator to the next level …and continue to dominate our industry.  We have a lot to do…the next five years start today!”

Navigator will reconvene in April this year for a Virtual All Hands, and plan to be back at the Marriott for the next full All Hands in July of 2016.

Navigator, All Hands,
Return to Blog