Navigator measures past, targets future at July All Hands conference 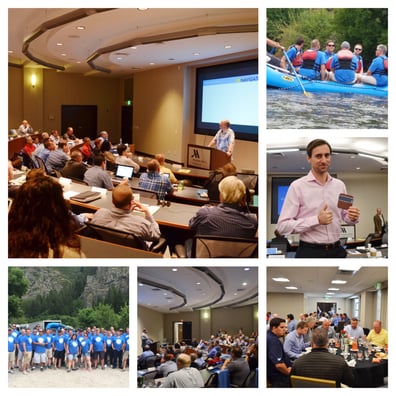 Navigator Business Solutions concluded its most recent semi-annual All Hands conference last week in Provo, Utah.  Held at the Provo Utah Marriott Hotel from July 14-16, the event brought together the entire Navigator team from 27 offices throughout the country.  Continued growth, and emphasis on achieving aggressive company goals dominated the event’s dialogues as Navigator seeks to further strengthen its status as SAP’s top cloud ERP reseller.

Company bookings, new client demographics, sale orders by industry, and various revenue figures were among the topics presented in the initial general session led by Navigator’s CEO, Grant Fraser.   Following Mr. Fraser’s report, the company’s executives spoke briefly regarding the performance of their respective departments during the first half of 2016.  Over the following days, the company would split into groups to discuss and train within relevant break-out sessions led by Navigator’s executive and management teams.

Additional highlights of the conference included a spotlight on noteworthy employees during Navigator’s Employee Value Reward Program on Thursday morning.  Six employees were recognized as best reflecting one of Navigator’s six respective values: Leadership, Accountability, Collaboration, Integrity, Passion, and Respect.  Each recognized employee was presented with a gift card worth $500.  On Friday afternoon, the team enjoyed a float down the scenic Provo River on guided river rafts.  In addition, company meals were provided throughout the conference.

During the concluding Saturday session of All Hands, Mr. Fraser stressed the importance of constantly improving as an entire organization.  He noted that “Navigator is a good company and does a lot of things well, but over the next five years the challenge is to evolve from good to great”.  In accordance with his challenge, he presented guiding principles which will allow the company to reach the goals that have been set.

Navigator will reconvene in September this year for a Virtual All Hands, and plan to be back in Provo for the next full All Hands in January of 2017.

Events, All Hands,
Return to Blog